October 24, 2016
Don't worry if you haven't seen the Season 7 premiere of The Walking Dead. I won't spoil anything here.

The episode definitely stung,... a lot. It left a very sour taste. It left me, as a fan, uncertain of how I felt about it.

But, that's exactly how they want us to feel at this point. The episode, (again, without spoiling anything) is devastating. If you have anything to do which requires a cool and clear head, don't watch this episode right before it. 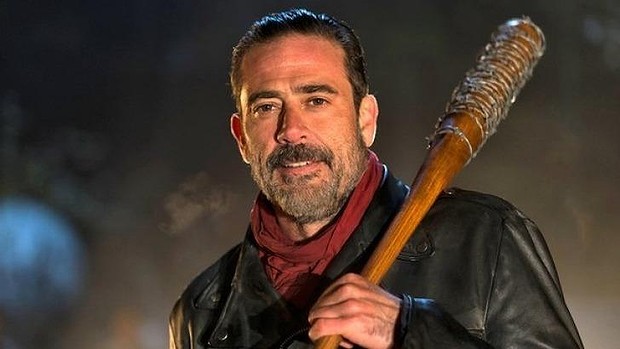 I Love Jeffrey Dean Morgan. Everything I've ever seen him in, he is both entertaining and completely convincing. Good actors can give you one or the other of those things. It takes a great actor to give you both,... and a superb actor to do so, consistently.

His portrayal of the Comedian in Watchmen, made me Love the character I liked the least (and even hated) in the comic. I can't picture anyone else playing any of the characters he's played; from John Winchester in Supernatural to Clay in The Losers. He makes every role his own. Negan is no exception to this. From start to finish, I absolutely believe in how utterly cruel, remorseless, and psychopathic the character is.

I have this problem with TV dramas. It's a pretty big one and it's certainly pervasive throughout the medium and the genre; with very rare exceptions, the villains suck. They just never convince me. They're just not dark-dangerous-foul enough to get me to genuinely worry about the heroes. The villains thus far on The Walking Dead have been,... ok, I guess. But, they've always been a trade-off of factors. Some were almost dark enough, but didn't have the chops to do anything about it. These psychopaths were usually dangerous only because of circumstances beyond their direct control that facilitated an opportunity for them to act on their hateful urges and pose a real threat. On the other hand, those villains that were capable enough to be dangerous without a Deus ex machina putting the gun in their hand, weren't nearly dark or evil enough to make their talents scary.

Negan is the first TV-villain I've seen in a long time that actually scares me. What's lurking just out of sight, behind that razor-blade smile, is more sinister than all of the other villains who've appeared on the show, combined. What's worse, he is not a mere beneficiary of circumstances. He is a creator of them. For the entirety of his screen-time, he is in utter control of the universe. His people, Rick's people, even entire hoards of walkers, are to Negan, nothing more than tools which he turns to his own designs, seemingly without notable effort. Even those actions and events that occur outside of his control, end up serving his purposes, and *not by chance,* but by the way he adapts himself to them. He is unflappable.

He is a threat to our heroes in every conceivable way. He manipulates everyone and everything around him to accomplish his goals. Nothing is ever out of hand, for him. And again,... the guy is just pure, psychopathic evil personified.

What I'm saying is that it's good that the episode's sting is as harsh as it is, and it is, in fact a must-watch.

Good TV-villains are black diamond-rare. They're also commensurately expensive. Speaking in the currency of narrative, it will (and should) cost something to establish such a show-stealing threat. Into every pot of chili, a few scoops of spice must fall. Otherwise, the longer it's on the fire, the weaker it will become.

At the outset of the show's seventh season, I'd say it's a good time to reach for the Japanese Ghost Peppers.