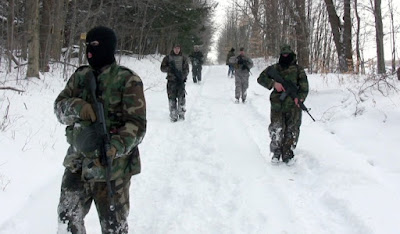 (Copied with permission from The Free Encyclopedia on US Law)

[Latin, Power of the county.] Referred at Common Law to all males over the age of fifteen on whom a sheriff could call for assistance in preventing any type of civil disorder.

The notion of a posse comitatus has its roots in ancient English Law, growing out of a citizen's traditional duty to raise a "hue and cry" whenever a serious crime occurred in a village, thus rousing the fellow villagers to assist the sheriff in pursuing the culprit. By the seventeenth century, trained militia bands were expected to perform the duty of assisting the sheriff in such tasks, but all males age fifteen and older still had the duty to serve on the posse comitatus.

In the United States, the posse comitatus was an important institution on the western frontier, where it became known as the posse. At various times vigilante committees, often acting without legal standing, organized posses to capture wrongdoers. Such posses sharply warned first-time cattle rustlers, for instance, and usually hanged or shot second-time offenders. In 1876 a four-hundred-man posse killed one member of the infamous Jesse James gang and captured two others.

In 1878 the use of a posse comitatus was limited by the passage of the Posse Comitatus Act of 1878. This act, passed in response to the use of federal troops to enforce reconstruction policies in the southern states, prohibited the use of the U.S. Army to enforce laws unless the Constitution or an act of Congress explicitly authorized such use. This act was amended five times in the 1980s, largely to allow for the use of military resources to combat trafficking in illicit narcotics.

Though rarely used, the posse comitatus continues to be a modern legal institution. In June 1977, for example, the Aspen, Colorado, sheriff called out the posse comitatus—ordinary citizens with their own weapons—to hunt for escaped mass murderer Theodore ("Ted") Bundy. Many states have modern posse comitatus statutes; one typical example is the Kentucky statute enacted in 1962 that gives any sheriff the power to "command and take with him the power of the county or a part thereof, to aid him in the execution of the duties of his office" (Ky. Rev. Stat. Ann. § 70.060 [Baldwin 1996]).

"Posse Comitatus" is also the name taken by a right-wing, antitax extremist group founded in 1969 by Henry L. Beach, a retired dry cleaner and one-time member of the Silver Shirts, a Nazi-inspired organization that was established in the United States after Adolf Hitler came to power in Germany. The group operated on the belief that the true intent of the founders of the United States was to establish a Christian republic where the individual was sovereign. Members of the group were united by the belief that the federal government was illegitimate, being operated by Jewish interests through the Internal Revenue Service, the federal courts, and the federal reserve. The Posse Comitatus received widespread media attention in 1983 when a leader of the group, Gordon Kahl, was involved in a violent standoff with North Dakota law enforcement officers. Convicted for failure to pay taxes and then for violating the terms of his Probation, Kahl shot and killed three officers and wounded three others before being shot and killed himself.

Hasday, Jill Elaine. 1996. "Civil War as Paradigm: Reestablishing the Rule of Law at the End of the Cold War." Kansas Journal of Law and Public Policy 5.